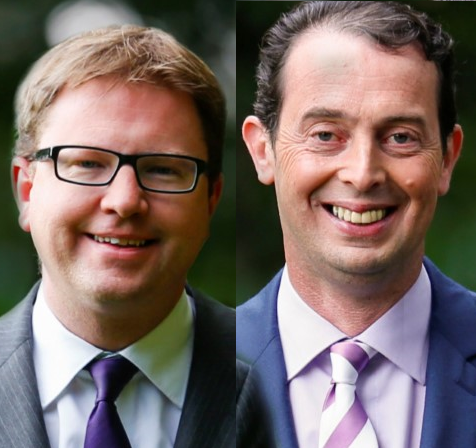 First elected in 2016, James and Frank have both worked tirelessly both on the ground in Kildare and in Dail Eireann to represent the people of North Kildare.

Through their advocacy with both local and national agencies, Frank and James have been assiduous in tackling the issues large and small that are impacting on the lives of local people.

PLEASE VOTE 1 AND 2 IN ORDER OF YOUR CHOICE

Lack of Support from Government for SMEs a Real Concern says O’Rourke. Local Fianna Fáil TD, Frank O’Rourke, has called on the Government to provide more supports to the SME sector, specifically Direct grant aid, in the context of BREXIT.

Frank commented, “I have consistently raised the challenges the SME sector are experiencing, in particular in the context of Brexit. With increased interest rate as compared to the EU average, increasing labour costs , increased insurance costs, increased commercial rates and now the threat of Brexit, the Government in my view are very slow to respond to the emerging challenges faced by SMEs.”

“Government Ministers continuously reference the Brexit loan funds as the solution to any questions posed on business support preparedness for Brexit. Yet few businesses have utilised these funds with only 11% of the €600m Brexit loan funds been approved for lending, with over €500m still to be sanctioned.”

“Revenue previously identified around 90,000 Irish businesses who traded with the UK in 2018. Yet one 675 of these businesses, less than 1%, have participated in the Brexit preparedness one-day customs workshops, run in all counties by Local Enterprise Offices.”

“The Government needs to outline all the contingencies and supports that will be available for businesses to cater for all scenarios including a hard Brexit. Direct grant aid is an urgent necessity for SME to deal with Brexit. Fianna Fáil have consistently called for an enterprise stabilisation fund and employment support scheme to be made available to the worst affected firms, as a policy response from the impact of a hard Brexit.”

James Lawless TD questioned the Government on the current state of Irish Research on the first day of the new Dail session . It has emerged that just one of more than 400 recently announced European Research Council grants has been awarded to Ireland.

James said, “Many stakeholders would agree that Research in Ireland is in crisis. The Government responded with the usual bluster but they cannot deny that changes brought in by Fine Gael and Labour in 2012 hindered Irish Research by directing funding away from discovery research. This is why I have introduced the Industrial Development (Science Foundation Ireland) (Amendment) Bill 2018, which aims to achieve a better balance between discovery and commercial research.”

The HSE Capital Plan 2019 recently allocated funding to the long awaited extension of Naas Hospital. The new endoscopy, day procedures and oncology units can now progress to the design stage of the process.

James commented, “This summer the County Council extended the planning permission for this extension, which was originally granted in 2014, and it is good to see that concrete funding has finally been allocated to this much needed project. I have raised this matter over the past few years with the Minister for Health, Simon Harris, and I will continue to follow up on this issue and ask that the extension proceed as quickly as possible following the 5 year delay.”

James Lawless TD is meeting Mark Zuckerberg today in the context of Facebook’s attempts to tackle some of the many issues on its platform.

James – who sponsored a bill targeting trsnsparency issues on Social Media – spoke earlier on Morning Ireland where he set out some of the issues he hopes to discuss.

You can hear the interview here