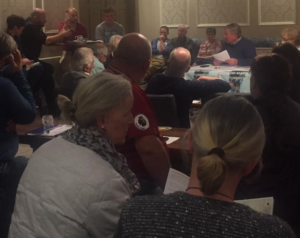 Afterwards, Cllr Naoise said :”The people of West Kildare defeated the Maighne proposal and have my full backing with their objection to the most recent one. I’ve always supported renewable energy but not to the detriment of people’s livelihoods and health. Even though this area won’t be in my electoral area at the next election, I committed from the outset of my election to represent all the people of this area to the best of my ability and I will continue to do so.”