Frank O’Rourke TD has again pressed Iarnrod Eireann to provide increased capacity on the Hazelhatch/Kildare Rail Line, for Celbridge and Naas rail commuters, as the numbers using the service grows.

“Since the Grand Canal Dock Line opened in 2016, the number of passengers, using the Kildare Line is increasing. The Kildare Line has now opened up commuters to the heart of the City Centre and more capacity is required.” 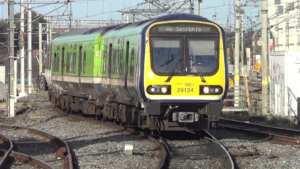 “I have raised the matter with Iarnrod Eireann and the National Transport Authority (NTA). Commuting to Dublin City Centre by car from North Kildare is now becoming almost impossible at peak times. Once we provide a regular and reliable public transport service, people will use it.”

“The reduction in the fares for Naas/Sallins users earlier this year, together with the opening up of the Kildare Line to the heart of the City Centre, is making the Kildare Line more attractive for commuters, and we must respond by providing more capacity.”,concluded Deputy O’Rourke.