Frank commented, ‘I have contacted the OPW and met with Kildare County Council senior manager and Director of Services Joe Boland on a numerous occasions in recent months in an effort to have the issue of flooding up at Hazlehatch resolved.’

‘This is a significant issue for this area given that planning permission has been refused for the construction of a new school on the Hazelhatch road because of the risk of flooding. It is now vital that measures are put in place to have the risk of flooding addressed.’ END_OF_DOCUMENT_TOKEN_TO_BE_REPLACED

Frank commented, “I am pleased that this process is progressing well and works are currently been carried out and are near completion by the developer/contractor in relation to the snags which were identified by the Council and Residents. I will continue to make representations on behalf of the Residents and work with the Council until the snagging is complete to enable the Council to advertise these Estates in order for them to go through the statuary process of been taken-in-charge by K.C.C.”

“I look forward to continuing this work with my Colleague Cllr. Michael Coleman until this process is completed.” 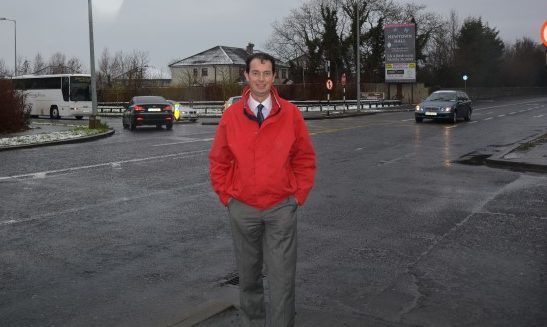 Following his ongoing representations, the Council have confirmed that the developer has engaged with the Council regarding their obligation and planning condition to install signal lights at this junction. END_OF_DOCUMENT_TOKEN_TO_BE_REPLACED

James Lawless has raised the issue of the operation of the new T-Junction in Kill at a Council meeting.

“At a recent meeting of Naas Municipal District, I asked Kildare County Council for clarification on the operation of the new T-junction in Kill village. The T-junction was installed during the past year to replace the roundabout that served the Hartwell Road. Local residents have complained that the T-junction was creating traffic problems. Since the roundabout in the middle of Kill village was replaced by a T-junction, road users coming from the Hartwell Road are facing long tailbacks to get on to the Main Street. Many residents have raised this with me.”

“I’ve sought clarification from the council on the operation of the new junction layout. I want to see the council address the tailback issue since there weren’t any traffic problems when the roundabout existed. I understand the new design was mandated by the NTA and again it appears the motorist has been left the worse off for it.”

A full review of Naas town parking by-laws proposed by Cllr James Lawless was agreed at a recent meeting of the Naas Municipal District.

James said,”A motion I put forward was passed by the council seeking to immediately commence a review of the pay parking laws around the town. After 18 months of effort to improve the parking situation in Naas a root and branch review of the entire situation is now needed to bring things forward. Over the last 18 months I’ve made many attempts to bring about improvements to the parking situation in the town. It is becoming very frustrating and progress is slow. Therefore I believe at this stage the only way forward is to bring all parties together to hammer out a parking deal for the town. Businesses, residents and shoppers alike need progress on this critical issue.” END_OF_DOCUMENT_TOKEN_TO_BE_REPLACED